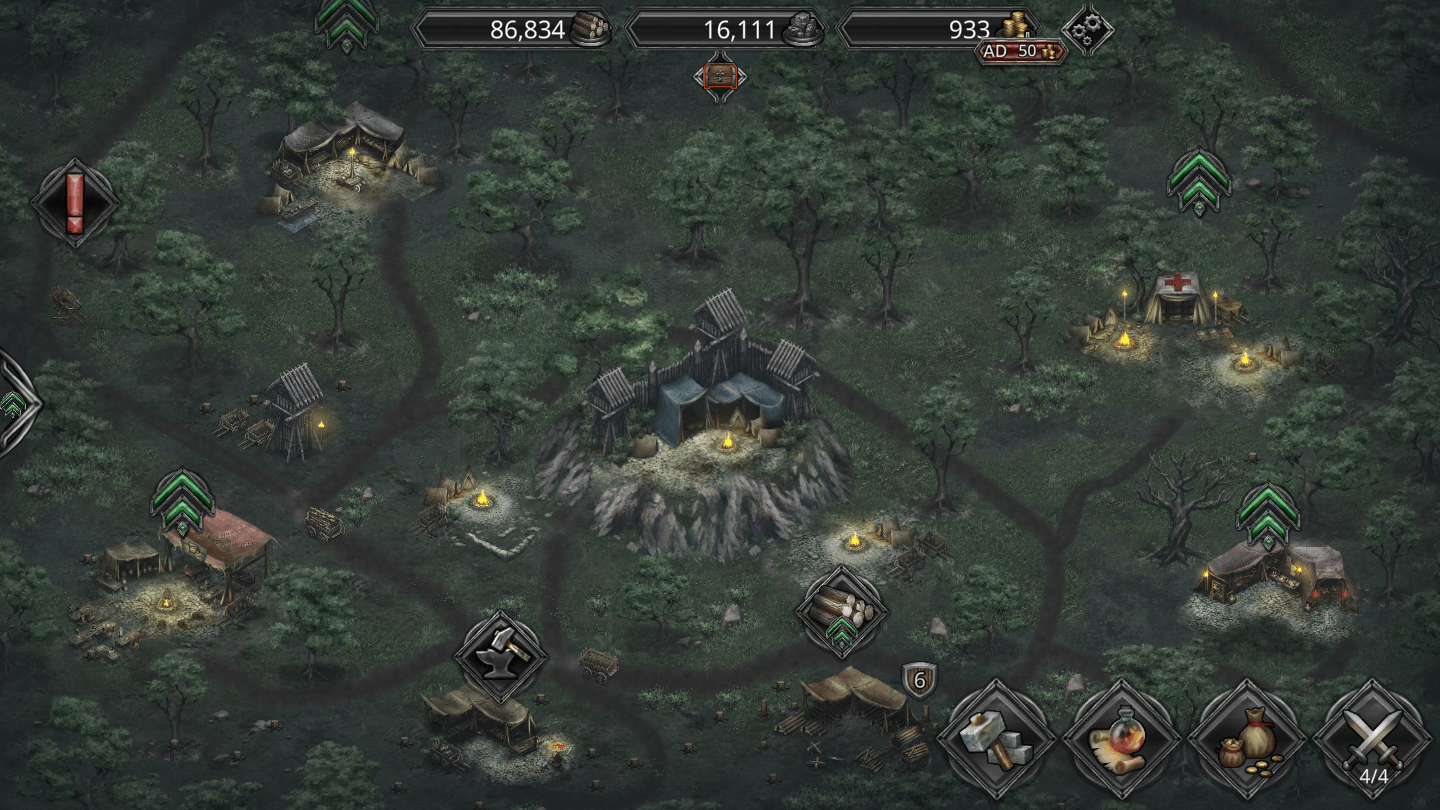 Champions of Avan is a stunning idle role-playing game from Early Morning Studio. This dark RPG has excellent hand-drawn visuals. Reminds us of graphic novels and gamebooks.

You start your adventure gathering resources from mines and sawmills, recruiting new units at the tavern and expanding your small village with the hopes of turning into a prosperous metropolis. But enemies lurk in the dark. From bandits to goblin guards to dragonlings, you must defeat them before you can find more resources and expand your empire.

If you have just started playing Champions of Avan, then you find these tips, tricks and strategies useful. You will also learn how to increase idle time, find new mines and quarries, recruit and expand your party.

In Champions of Avan, you must construct all five buildings and upgrade them from time to time to improve you village and champions. Here’s a detailed guide on these buildings and their advantages:

Tavern: Recruit champions here. You can recruit one champion after upgrading the tavern. You will need gold to recruit a champion.

To hire a new champion, first upgrade the tavern and then tap on the crossed swords icon on the lower-right corner of the screen. Next, tap on the “recruit” button. You will see 4 randomly generated characters and their stats. Choose the one that has better stats than the rest. Make sure you tap on a champion portrait pic to know his/her stats in detail before recruiting them.

To build the tavern, you will need 2 wood. Keep upgrading using wood to recruit more heroes.

Store: The store is the best place to purchase new equipment for your champions. You will need at least 100 gold to purchase a piece of equipment. You should have 100 wood to build the store.

To access the store, tap on the bag of coins on the lower-right corner of the screen. Make sure you upgrade the store at regular intervals to find higher-grade weapons. Save your hard-earned gold to purchase them.

You can also sell unwanted items for gold. In the store menu, tap on the sell tab to do this.

Hospital: After battling enemies, injured/defeated champions need to heal. Depending on the damage inflicted on them, the heal time varies from one champion to the other. All heroes will start healing automatically after a battle. Defeated heroes will take more time to heal and can’t be taken to battle until they recover fully. However, undefeated hero with lower HP can be taken to battle while they are healing.

Blacksmith: Forge a random item at the blacksmith. Tap on the hammer-anvil icon above the blacksmith building and then tap on “Forge Item”. Select level of item to forge.

Higher level items will take more time to forge than a lower-level equipment. Collect 500 iron to construct this building.

Alchemist Lab: Improve your champion stats by researching skills at the alchemist lab. You can also increase production and gathering speed by researching certain skills.

Tap on the parchment/beaker icon on the lower right corner of the screen. You will see locked skills. This is because you haven’t upgraded alchemist’s lab to a certain level.

For example: Upgrade the lab to level 2 to unlock +4% increase in wood collection from all wood wagons.

You will need 2000 iron to build the Alchemist Lab.

Do the same or quarries that produce iron. Upgrading a quarry will increase the amount if iron transported from it to the castle. The increased value is per wagon.

You can also unlock extra wagons on certain quarries and sawmills by upgrading them to a certain level. However, you might have to explore a bit to find them.

You can recruit a new champion from the tavern soon after upgrading this building. But recruiting new champions doesn’t mean you can include him/her to your party to battle enemies. You must first upgrade your castle to increase party size and only then you can add a new hero who can accompany other champions to fight enemies.

The castle is in the middle of the screen. Tap on it and then tap on the upgrade button displayed on the lower-left corner of the screen. Leveling up requires more wood than iron. For example: To upgrade the castle to level 3, you will need 20K wood and 3K iron.

In the beginning you will start with only two champions. Once you upgrade the castle to level 2, you can add another hero to your party, making it three. Upgrading to level 3 will allow you to have a fourth hero in your squad. Make sure you hire heroes at the tavern first and then upgrade the castle to include them to your team.

How to Find New Mines, Quarries and Sawmills

In Champions of Avan, there are three main resources – wood, iron and gold.

Wood is gathered and transported to the main castle from sawmills.

Iron is mined from quarries and then moved to the castle.

Although very rare, you can obtain gold from gold mines. Before discovering a gold mine, you can get gold as rewards by defeating enemies or by tapping on the “Ad” button on the top-right corner of the screen.

Now let’s find out how to explore and discover mines, sawmills and quarries:

With your finger, press and drag on the screen to explore new areas. You might find a new iron mine or sawmill while exploring. However, you will have to clear any enemy encampments nearby.

Send your mercenaries (champions) to defeat enemies and clear their camps. Once you have cleared all enemy camps, tap on the newly discovered mine/sawmill and press the “start excavating” button to generate resource from it.

Let me explain this with an example:

To unlock the gold mine, I first had to vanquish all enemies at the “Bleeding Tree”. But before that I had to clear all enemy camps/watch towers in and around the bleeding tree.

Once all enemies are defeated and the bleeding tree area cleared, a swirling blue circle appeared around the gold mine, indicating that it has been unlocked. I just had to tap on it and then tap “Start Excavating” to mine gold.

Look Around to Find Free Resources

There will be certain boosters/free resources appearing randomly in your territory. One of them is the speed wagon.

Keep an eye on your territory to find various free resources, such as gold coins, iron, wood etc. Check the screenshot above to get an example of how they look like.

Tap on the crossed swords icon to find a list of heroes in your party.

Next, tap on a hero card. On the left shows the hero’s portrait, the damage (crossed sword icon) inflicted by him/her per attack. So if the number is 5, then the damage dealt by the champion would be 1 and 5, depending on the enemy’s defenses, but not more than 5.

The shield icon beside the crossed sword icon on the hero’s portrait is the armor. Armor reduces enemy damage. If your hero has 1 armor, then the chances of damage reduction will be by 1.

The heart icon (red bar), below the hero portrait shows the total health. Below the health bar is the blue XP bar. This XP bar fills up when your champion finishes his/her battle against an enemy. Win or lose, that hero will gain some XP.

Below the hero portrait, on the lower left is the abilities section. You will unlock a unique ability when the hero reaches a certain level.

The hero gets a stat bonus from the equipped item depending on the equipment type and its rarity (weak, strong etc.)

How to Level Up Heroes

Leveling up your heroes increases HP and/or attack (damage). The best way to level up your heroes is to send them to battle enemies. This way they will gain XP (as shown by the blue bar on their portrait). A hero levels up when his/her XP bar is full.

Send your champions to raid enemy camps. Drag on the screen to explore the map and spot enemy camps. Tap on an enemy camp/watchtower and press the attack button.

Select the best heroes by tapping on their portraits shown on the lower-left corner of the screen and press the “send” button.

Look for exclamation marks around your territory. These appear at the random intervals. Tap on such an exclamation mark to find low –level enemies. Always send your champions to fight them and obtain gold/XP.

When a hero reaches a certain level, a new skill unlocks.

You can equip these four items to your champion:

Each of these items increase your hero’s stats. Some may increase health (HP) others may increase damage dealt to the enemy or armor stat. Equipping items can be very helpful for heroes, especially when you are planning to send them to battle tougher enemies.

Here are a few ways to obtain equipment:

– Forge a random equipment at the blacksmith. Tap on the anvil/hammer button on the screen and then tap on “Forge Item”. You can unlock higher grade items to forge if you upgrade the blacksmith. Make sure you have plenty of iron to upgrade it.

– Build the shop and purchase the best equipment using gold. Always check the stats boost granted by a piece of equipment before you purchase it. The stat increase is displayed on the top of an equipment’s icon. To access the shop, tap on the money bag icon on the lower-right corner of the screen.

– Battle boss enemies to gain a random piece of equipment. After defeating the bleeding tree, I received and old armor which grants +1 HP, +1 Attack/Damage and +2 armor to the one who has equipped it.

To unlock a new area, make sure you have defeated enemies near the border of that area. There will be watchtowers, which you will have to demolish by eliminating all enemies.

You can increase this idle time in Champions of Avan.  Tap on the alchemist lab building and upgrade it to level 2. Now tap on the beaker/scroll icon on the lower-left corner of the screen and tap on the “increased idle time” ability.

You will need 200 gold to research this ability. Once unlocked the idle time will increase to 4 hours, which means you will earn 4 hours; worth of resources when you are not playing.

However, researching take time. It will take around 4 hours to fully research this ability.

1 thought on “Champions of Avan Guide: Tips, Tricks and Strategies”