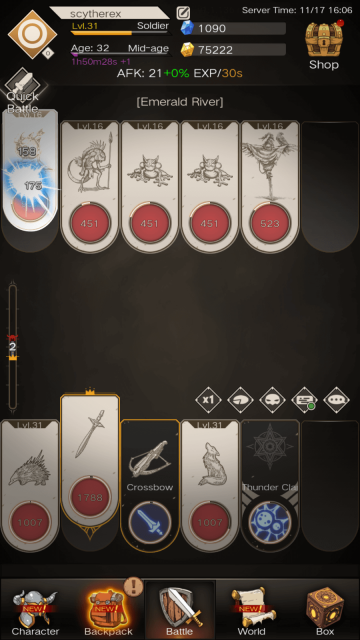 Immortal Reborn is a stunning idle card battle game from LTGames Global. Fans of old-school RPGs will love everything about this game.

With more than forty classes and several skills to choose from, the game lets you experiment with various skill combos and weapons to get the optimal character build. Our Immortal Reborn guide will help you get started and you will learn more about weapon and skill combos.

Immortal Reborn combines idle RPG with card battle elements. If you have just started playing, then you might be curious about gameplay and combat. Read on to know how to play:

Select a starting class from 7 different classes. Make sure you check the graph and its attributes beside each class before choosing one.

After selecting a class and creating a character, you will be taken to the combat screen. The overall battle setup is very similar to card battle games. Enemy cards are on the top and your character’s primary weapon card (Main Hand) and other cards, such as skills and secondary weapon (Off-Hand), are on the bottom of the screen.

The artwork of your character’s primary weapon will be on his card. Below the weapon art is his total HP (Hit Points) inside the red circle. The yellow action bar is the circle around the HP stat. Your character attacks with his primary weapon when the yellow border on the circle reduces completely. The main weapon will always attack the enemy on the extreme left of the screen.

Each time your character’s main hand weapon, off-hand weapon or skill attacks enemy cards, their HP reduces by a certain value. The higher your main and off-hand weapon’s ATK/DMG stats, the faster their HP will be reduced and they will be defeated much quicker. The same goes for your character- his HP decreases each time enemies attack him. If you have equipped minion skills, then their HP will also be reduced when enemies attack them. A Minion HP is also shown inside the red colored circle. You can equip a minion after learning a particular class in the beginner and intermediary class systems.

You will be defeated your total HP points displayed on the main hand weapon is reduced to zero. You will have to eliminate all enemy cards on the top of the screen before they attack and reduce your main hand weapon card’s HP (Red circle).

Along with the main hand weapon, you should also equip an off-hand or secondary weapon. Having two weapons will generate two cards during combat and both cards will attack enemies in tandem. Make sure you equip one-handed weapons in both main and off hand in the “Character” tab.

To learn a new class, tap on the current class icon on the top-left corner the screen and then tap on the empty socket. After selecting a class, equip skills. Skills will be unleashed automatically after a certain cooldown time.

Once you are familiar with the game play, it’s time to learn a few beginner-level tips, tricks and strategies to master Immortal: Reborn. Check out what we have written below:

How to Choose the Best Weapon Combo

Always experiment with different weapon combinations to deal maximum damage to enemies. Tap on “Character” and then tap on the main weapon slot first. Press the “Change” button to switch to a more powerful weapon. Check stats before changing. You can do the same for your secondary weapon.

Start by choosing the main weapon that has higher ATK and DMG stats. Higher stats will be shown in green. Also, don’t forget to check your main weapon’s quality. You can equip a “Rare” quality weapon as it will provide certain key status effects and increases random stats, such pure damage and light damage.

You can check all weapon stats and get more information about each stat after changing a weapon. First you will have to change a weapon and then tap on the same weapon again in the character menu to check detailed stats. For some weapons, such as the Rare longsword, there will be a small exclamation mark on the “Random Stats” section. Tap on the exclamation mark to get a full list of stats and their effects on enemies.

For the off-hand weapon, you can always select a lighter one-hand weapon, such as a dagger. Always check a weapon’s weight/ATK speed. A lighter weapon will have a lower ATK speed stat (in seconds), which means that it will launch an attack faster. The faster the attack speed, the shorter the time taken for a single attack.

Just check the circle around the weapon in battle mode and you will notice that it will reduce much faster for a light-weight/high ATK speed weapon.

Enemies drop weapons when you are not playing. You can also get weapons and armor by completing normal and bounty quests (unlock tavern) in the map menu. Tap on the exclamation mark displayed on the right side of the map screen, accept a normal quest and defeat all enemies in that quest to gain weapons, bonus XP and other rewards.

Equip a Higher Attack Range Weapon to Your Character

In battle mode, you may have noticed a range meter located on the left side of the screen. It indicates the distance between two sides, your character (yellow crown) and enemy party (red crown).

Before combat, the range meter starts from 6 and then goes down to 2. 6 is the farthest distance between two parties and 2 is shortest. Normally battle begins when the distance between your character and the enemy is 2, but you can attack earlier if you equip a weapon that has a higher “Attack Range”.

You can view your current weapon’s attack range before tapping on the “change” button in the “Character” menu. You can find “Range” just beside “ATK SPD”. The higher the range, the earlier you will attack the enemy, much before the range meter comes down to “2”.

Along with the attack range, you should also check ATK speed. Remember that a weapon takes a few seconds to charge up (shown by the circle around it) before launching an attack. A lower ATK SPD (in seconds) stat ensures that the attack will be launched faster as the time taken will be shorter.

Experiment with different skill combos from two or more classes

After unlocking the Beginner class (unlocks at level 6) and the Intermediary class in Immortal Reborn, you can start experimenting with different skill combos. You can equip up to 4 different skills on the empty sockets.

The last socket will be unlocked when you reach level 30-35 or can be unlocked faster using gems. Obtain lots gems from announcements gifts. Check your mail (envelope icon) to claim gems and other rewards.

To equip skills, tap on your current class’s icon on upper-left hand corner of the screen. It’s located just beside your name/user-name.

Choose a class from beginner class (first slot) and another class from intermediary class (second slot).

Each class has more than one skill. Tap one the skills next to beginner class and the press the equip button. Do the same for the intermediary class. Experiment different skill combos (you can choose a total of 4 skills) to get the best combination against enemies. Make sure you check each sill’s stats by long-pressing its icon.

Keep playing this idle RPG to unlock the “Tavern” in the “World” tab. Now tap on the Tavern and then choose a bounty quest by tapping on the “Go” button. Your character will prepare for the bounty quest and if you have a strong character build, you will complete the quest in no time.

You will need silver coins to obtain a new bounty quest. You can earn these coins from normal quests in the world/map menu. Tap on the exclamation mark on the right side of the map to accept a quest and complete it to gain silver coins.

Immortal Reborn is an idle game so it’s obvious that you will gain idle rewards, including weapon/gear drops when you are not playing.

But did you know that you can gain offline loot instantly while playing? All you have to do is tap on “Quick Battle” in the battle menu and gain instant offline rewards of the next 180 minutes. You will have a few free attempts to gain offline income and the weekly first attempt will always be free.

Make sure you have free slots available in your backpack. If not, then sell unwanted items. You can sell weaker weapons that you won’t be equipping to your character.

Explore the map and Complete Quests

Explore the map and look for quests. Complete them to get various rewards, such as player XP, silver coins, weapons/accessories and scrolls for upgrading skills.

Quests will be displayed in the right-hand side of the map screen in the “World” menu and will usually have an exclamation mark.

Tap on a quest with an exclamation mark and then tap on the “Go” button to start the quest. You will complete the quest when the green quest bar on the top of the battle screen fills up completely. The bar will fill a bit every time you defeat all enemy cards during a battle.

Upgrading skills improves key stats, which is displayed on their info page. Tap on the class icon on the upper-left corner of the screen and then tap on a skill beside a class to open its info page.

You will find the upgrade button on the bottom of a skill’s info page. Tap on it to level up a skill.

Collect scrolls to upgrade skills. You can get these scrolls from quests in the map menu and bounty quests from tavern.

Check your mail for gifts, which contain useful rewards, such as Mithril and Scrolls. Claim your rewards before the mail expires.

So, your backpack has no space for more weapons, armor and accessories? A full backpack can be a problem as the player won’t be able to claim quest rewards just because there’s no space for a weapon or item obtained from that quest. He/she has to get rid of some items before claiming quest rewards.

You can sell an unwanted item to not only free up some space from your backpack, but also get rewards such as gold and mithril (obtained by selling rare weapons). Tap on the backpack and then tap on an item to sell it.

Be careful while selling a weapon/armor. The background of an item in your backpack is color-coded, indicating its quality. Items with a blue background are of rare quality whereas the ones having a yellow background are legendary items. Make sure you check each item’s stats before selling it.

How to get Mithril to Upgrade Weapons and Armor

You will need “Mithril” to upgrade weapon or armor in Immortal: Reborn.

The best way to gain mithril is to sell unwanted rare items in your backpack. Rare items have a blue background. Make sure you select the one that you really don’t need. i.e. An item that has been replaced by a stronger rare/legendary weapon in the character menu.

Once you have gathered enough mithril, tap on the “Box” on the bottom of the screen and tap on “Equipped”. Select a weapon/armor/accessory and then tap on “upgrade”. You have successfully upgraded an item.