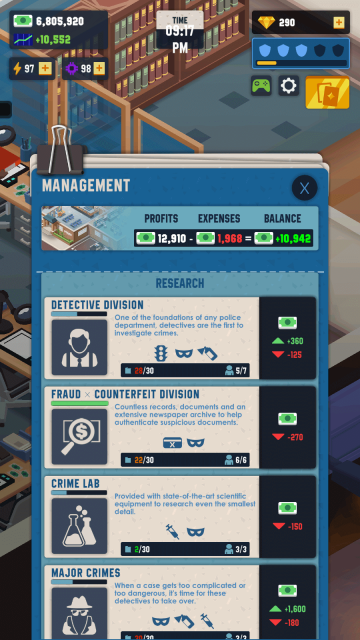 In Idle Police Tycoon, crimes are often denoted by symbols. Here’s a list of five symbols and their meanings:

Note: As you move to a different city, new crime symbols will be introduced to this game. Tap on the blue button (Management) on the lower-right corner of the screen to find them. Check the research section and note down the symbols under each division. Build them one by one once you have enough cash.

Each crime needs to be investigated by a separate division before it is handed over to the police officers and the tactical division. The clerks/detectives first investigate a crime and then move its file to the authorities who then arrest offenders.

You may also have to build the fraud x counterfeit division to investigate these crimes – controlled substance related crimes (denoted by the syringe symbol) and counterfeit crimes (credit card).

Get the “Major Crimes” division to investigate burglary (mask), defacement of property (spray can) and syringe (controlled substance-related crime). If victims register these crimes with the front desk, interns will move the relevant case files to the Major Crimes division.

TLDR; if you want faster investigations, especially for crimes that have syringe, mask and card symbols, you must build the fraud counterfeit division, crime lab and major crimes division. Case files with these symbols will be stored in the reception area shelf. Interns will then move these case files to their respective division.

Are you seeing exclamation marks and yellow triangles in a particular department? Here are some tips to solve complex case problems in Idle Police Tycoon.

Police officers deal with common crimes that have symbols of traffic lights and spray cans.

However, you may have to build the tactical unit division to arrest offenders involved in controlled substance crimes (syringe) and burglary (mask).